The Former Pupils Club was formed in November 1973 with the merger of the former pupil clubs of Daniel Stewart’s College and Melville College following the merger of the two schools, its principal objective being to promote fellowship between former pupils of Stewart’s Melville College and to promote the interests of the school and affiliated sports and branch clubs. The origins of the merged clubs go back to the 19th century. Participation in the sports clubs has been “open” for many years with rugby, cricket and hockey clubs operating out of the school’s playing fields at Inverleith.

The club is based on the Clubhouse facilities at Inverleith, Ferry Road, Edinburgh.   The Clubhouse has a function room on the ground floor and a lounge bar on the first floor. It is generally open on Saturday afternoons and evenings and Thursday evenings for the use of members, the sports clubs and others and available as a venue for  regular functions.

The facilities are available for hire by members and non members. Up to 120 people can be accommodated at seated functions.

You can read more about the Club here and view the latest News & Events. 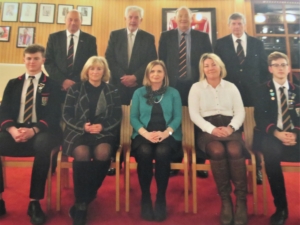 The Club is managed by the “Council” which is headed up by the Club President is who normally elected for a two year period.  The Council comprises the President, the Vice-President, eight ordinary members (of whom two may be associate members), an Honorary Secretary and Honorary Treasurer, the school Principal and the editor of the annual publication “FP News”.  In addition two sixth form pupils from SMC are invited to attend the quarterly meetings of Council.

The day to day operations of the clubhouse recently transferred to the school under a clubhouse administrator, Laura McIntosh, previously the club treasurer.  Denise Mitchell remains as bar manger.   Catering is provided by the school caterers, Inspire.  The intention is that patrons should have a seamless experience.

The Annual General Meeting of the Club is held in October each year.   The Club’s Annual Dinner is held once a year usually in the Autumn.    A month end lunch is held on the last Friday of each month in the Clubhouse offering a choice of menu at reasonable cost. In addition a Special Christmas lunch is held in December each year and a number of other social functions are held on an ad hoc basis.

The Sports Clubs and Branch Clubs have their own range of activities and functions many of which are held in the Clubhouse.

Our current president is Ken Russell. A list of former presidents can be viewed here.