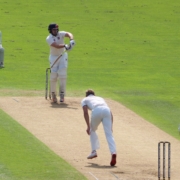 After last week’s weather cancellation the 1st XI resumed their East Premier League campaign against Heriot’s at Goldenacre having won the first match earlier in the season.

Captain Steven Parker won the toss and chose to bat first despite having won the first match batting second. Kyle McCallum (18 runs) and Mike Miller (20 runs) started profitably against the pace bowling of our former player Elliot Ruthven and Joe Kinghorn-Gray, ex RHC putting on 30 runs before Kyle stranded out of his ground was bizarrely run out by Hayes van der Berg after he had failed to take an overhead catch at mid off. Ben Wilkinson followed caught low down in the same position off Kinghorn-Gray with the score on 41. Shaylen who replaced Ben at the crease started confidently the score quickly moving onto 63 before he was caught behind for 15 off the bowling Michael Shean who had replaced Elliot Ruthven. The slow bowling combination of Shean and Scotland and Derbyshire player Michael Watt then appeared unplayable on a helpful wicket as we slumped to 77 all out with five of our bats failing to score.

Given the success of Heriot’s slow bowlers we opened with Greg Ruthven and Hayden Sweet with Kyle McCallum replacing Sweet after one over. Heriot’s reached 23 without loss and seemed on their way to a comfortable win when the pursuit of runs against a turning ball resulted in a succession of wickets so that the score became 44 for 5 and Stew Mel hopes of achieving something special were raised. Hayes van der Berg and Keith Morton then chose to pick their shots carefully so that after 26 overs Heriot’s achieved the anticipated win leaving Stew Mel to wonder how many more runs might have tested the home side more. Greg Ruthven bowled his 10 overs straight off taking two wickets for just 20 runs with Kyle McCallum one for 17 off seven overs and Sam Tait two for 27 off 8 overs making things difficult for the Heriot’s batsmen.

We have three Saturdays to go in the league season with home games to come against Watsonians, RH Corstorphine and league leaders Forfarshire. Aberdeenshire remain in the relegation spot two wins behind us.